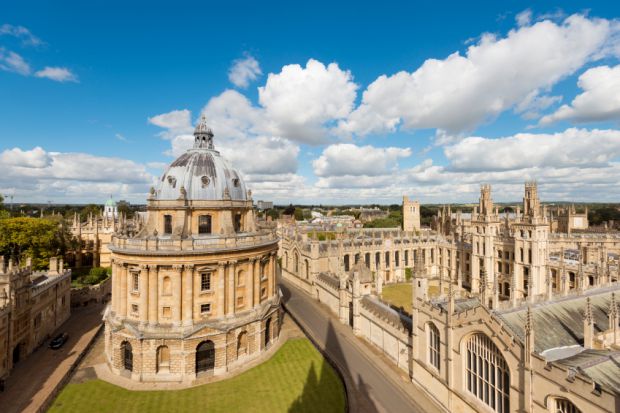 The University of Oxford has announced that its new graduate college will focus on the “two major challenges” of artificial intelligence and machine learning, and environmental change.

The college, first revealed by Times Higher Education in August, will see postdoctoral researchers and graduate students working on interdisciplinary research, mostly between those in the mathematics, physical and life sciences division, but also with some other disciplines, the university said in a statement.

The university has appointed Lionel Tarassenko, a professor of electrical engineering who leads the department of engineering science at Oxford, as head of house and to oversee the development of the college.

Professor Tarassenko said that the new college would “harness diverse expertise, bringing together researchers who have curiosity beyond their own subject in common”.

“Progress on issues such as climate change and the loss of biodiversity is being made at the nexus of the physical, natural and human behavioural sciences. Exciting research occurs at the boundaries between disciplines,” he said.

Oxford said that it would begin recruiting 200 graduate students to the college in 2019-20, with a view to them arriving in September 2020.

The new college, its first since 1990, forms part of the university’s strategic plan, approved in November 2018, which sets out its vision to increase the number of postgraduate taught students by up to 450 a year and postgraduate research students by 400 by 2030.

The strategic plan also says that it will increase the funding available to support the “most able” postgraduate taught and research students, and increase the proportion of fully funded graduate studentships. There will be an additional 300 graduate scholarships by 2030, it says.

The college, which will be located in the Radcliffe Science Library site in central Oxford, will also host entrepreneurs-in-residence to “stimulate interaction between members of the college, investors such as Oxford Sciences Innovation and those already running innovative businesses in Oxfordshire”, the university said.

The plans also include a refurbishment of the library and an integrated museums collection centre in the basements “open to all graduates”.

No decision has been made on the name of the college and there has been no word on how much funding the endeavour will require.

Written by Anna Mckie for TimesHigherEducation