Funding designed around a ‘false premise’ that every university is research-intensive, says Nobel laureate 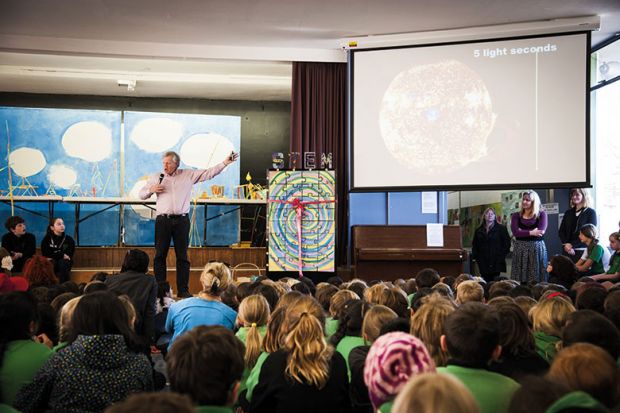 One of the fiercest advocates of research-informed teaching has softened his stance, saying pressures on funding may necessitate a partial retreat from Humboldtian principles.

Australian National University vice-chancellor Brian Schmidt said the Humboldtian tradition – where education is informed by research – was an important concept for research-intensive universities. “But I don’t think every university needs to be research-intensive,” he told Times Higher Education. “And we need to come to terms with that.

“If you’re an institution that is trying to create research leaders, that teaching is most effectively done through the Humboldtian model. But 90 per cent of the students who need a university education are not going to be research leaders. Our system is sort of designed around a false premise that we are all research-intensive.”

Professor Schmidt is believed to be the only serving university leader with a Nobel Prize, after sharing the 2011 gong for physics. Addressing the 2018 Times Higher Education World Academic Summit, he warned that backing off from research-led teaching was the start of a slippery slope.

A wholesale adoption of teaching-only academics would sever the teaching-research nexus and trigger a “dangerous and unsustainable” cycle where future students would be “completely decoupled from the research of the day”, he told the event in Singapore.

But, speaking on the sidelines of the 2020 Universities Australia conference in Canberra, Professor Schmidt said that the sector had reached an “uncomfortable state”.

“Once you start having a cycle where you’re not being taught by the people at the bleeding edge, you just dumb the whole system down,” he said. “Getting that balance right [is] a problem. We need to produce research leaders, and research-led teaching is important for that, but it’s not important for the average graduate. That’s the challenge.”

Chairing a panel at the Canberra conference examining higher education policy, Professor Schmidt asked whether it was now “reasonable…to expect everyone in the university to be applying for research grants”. He questioned the “return on investment to the nation” when people generated 100-plus page applications for grants they had less than a one-in-five chance of securing.

Andrew Norton, professor in the practice of higher education at ANU, said that university teaching warranted respect as a profession in its own right. But that suggestion encountered “huge cultural and industrial resistance” within universities.

“It’s almost as if [academics] accept the precariousness and maybe the low pay of academia because you get to do interesting research on the side,” Professor Norton told the conference. “A teaching-only academic, despite what [some] universities might say, is probably not regarded by colleagues as at quite the same level as a research-only or teaching and research academic.”

Professor Schmidt said that teaching-only liberal arts colleges in the US also suffered a “prestige” problem. “People aren’t going there,” he said. “The market seems to be misaligned.

“We need to somehow get into the zeitgeist of the population that a really good education like that is also incredibly valuable. We’ve got to get around the idea of prestige being the research-intensives.”