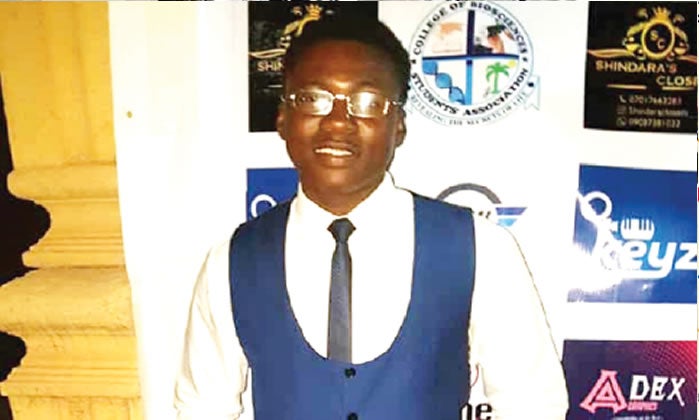 An undergraduate of the Federal University of Agriculture, Abeokuta, Seyi Akinade, has reportedly committed suicide.

The victim, in a lengthy post on Twitter before his death, said he could no longer live with the continuous harassment by men of the Special Anti-Robbery Squad, which he claimed led to his decision to kill himself.

His stepbrother, Toye Salawudeen, who announced the death on the social media, told PUNCH Metro that the family did not know about Akinade’s ordeal until after his demise.

The deceased had narrated on his Twitter page, @Akinadeoluwa17, how he plunged into $20,000 debt after he was arrested by the SARS personnel, who allegedly extorted money from him.

According to the 23-year-old undergraduate, who was also a forex trader, his encounter with the SARS personnel gave him constant nightmares.

He had tweeted, “It happened again tonight, I had the same nightmare that’s been reoccurring for months now since the incident happened, same faces. SARS officials in their black uniform carrying us away in the dead of the night and I wake up with serious chest pain from fear of what I was about to experience.

“It happened on the 2nd of February 2020 I was in my hostel working on my post data slides because I had to present the next day when all of a sudden these SARS officials entered my room. It was around 10pm and I still had my generator on maybe that was why they came to my room first, they just collected my laptop and phones, my friends were also in my room, we were all told to dress up and come outside, one of my friends was given a dirty slap for practically not dressing up fast enough ‘what did we do?’ I kept asking.

“They didn’t say anything and they threatened to waste me if I didn’t stop asking silly questions. We were handcuffed like armed robbers, all 17 of us, we were squeezed into small cars like goats to the slaughter, and from camp Abeokuta, we were taken down to Ibara Police Station. Immediately we got there I decided to plead with who was in charge that I had a presentation in school the next day, that they should please let me go early because at that time it was 12 in the midnight already, he said I will pay 200k! Ha! For what?

“I told him to go through my phone that I am not a fraudster, that I am a forex trader and he went through my phone and my friends’ phone nothing was implicating there, except for the bank alerts and that money were not even mine, I told him they were investors money. I forgot to mention I opened a trade on my trading platform before they came to arrest us, I also pleaded with them to give me access to my phone so I can close the trade or something they thought I wanted to call someone and they slapped me for requesting for my phone, the trade kept running till the next day.

“I slept in a cell that night for doing nothing, police will slap you and beat you, and prisoners will beat you when you enter the cell too! I cried till the next morning not because I was sleeping in a cell for doing nothing, but because I was on a losing trade with thousands of $ on the line and also because I was going to miss my project presentation which cannot be repeated. I was paraded like a thief in the morning and they were asking us what we did, with tears in my eyes I said ‘nothing’ they still slapped me and told me to admit I’m a fraudster without having anything incriminating on my phone!

“That day I lost almost 20k$ trading and I missed my presentation in school. They still wanted to collect bail after beating and harassing us for nothing. Since then I’ve been in massive debt, I couldn’t complete my education and my life has been in shambles and suicide has been the only thought on my mind every day. So in case I hurt myself and anyone is curious as to why I did it. This is my story.”

Akinade’s death has led to the creation of the #justiceforseyi hashtag on the social media, with Nigerians calling for the prosecution of the officers involved.

Salawudeen, who also demanded justice for his brother, told PUNCH Metro that Akinade died before he got to hospital.

He said, “Seyi was the quiet type and based on the kind of relationship we had, we were not very close. This morning (Wednesday), my mum called me that Seyi was dead and when I asked her what happened, she said he was vomiting and crying of stomach pain and asking for palm oil.

“He was rushed to three hospitals before he could be accepted, but he died this morning; we didn’t know what happened until I went to his Twitter page to check his last post and I saw his tweet and what he tweeted five days ago about what caused him nightmares. We want justice to be served and the police officers who caused this to be brought to justice.”

When contacted, the state Police Public Relations Officer, Abimbola Oyeyemi, said he was not aware of the case but would find out.

“I’m not aware of the matter, but there is no way policemen from Ibara will go and arrest in FUNAAB, but I will find out,” he stated.

He had yet to get back to our correspondent on his findings as of the time of filing this report.